I have decided to stop using watermarks on my photos. Many photographers and bloggers watermark their images to prevent image theft. However, it only discourages stealing. A thief can easily cropped it out to pass it off as their own. A crop of a photo with my current watermark

A recent encounter with such an incident made me realise that it is a waste of time using a watermark. Sure, it is simple to set up in Lightroom. I just need to create a watermark by typing “© Jen Xi” and include it when exporting the images.

There are many debates on the internet about the use of watermarks. I’m not here to debate on its use. I’m just stating my opinion on the issue.

When used appropriately, the watermark can help others identify the source or owner of the image. I have no problem with others using my photos if they have the courtesy to ask. If they are too shy or lazy to ask, I won’t get too upset if they use the image untouched and credit me. A link back to me would be a nice touch.

Some bloggers use their blog’s URL address as the watermark so that even if they are not credited, people who are curious about the source of the image can still find their way back to the source.

I find that amateur photographers tend to be more possessive with their works. They often place the watermark right smack in the centre of the image. With all due respect, the photos are usually mediocre and the intrusive watermark simply becomes more of a stamp of amateurism rather than a proper copyright. 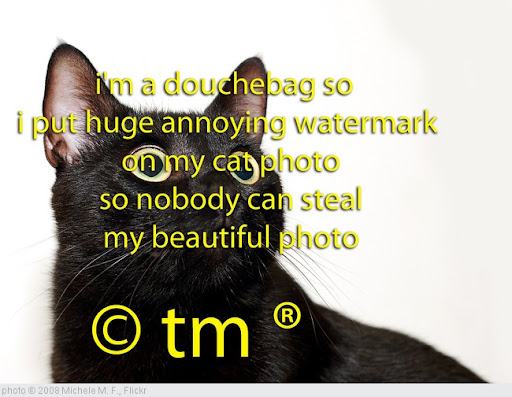 The more tasteful amateurs would try to put the watermark in a more fanciful position to complement the image. While these are slightly more pleasing to the eye, they still distract the viewer from the image. Some might argue that the watermark enhances the image. This might be true from a graphic designer’s point of view but as a photographer, I feel that a good photo needs to be able to stand on its own without any additional elements.

It is important to allow the viewer to truly appreciate the photo without the distractions of a copyright watermark. The least would be to place it in a corner where it would be the least obtrusive.

If someone is intent on stealing your images, a watermark would not stop them. Those who are worried of the repercussions of copyright infringement would be deterred by the watermark. However, if they have no concerns about being caught, they could simply crop the watermark out of the image.

Yes, some might argue that it’s because of such cropping that lead to photographers placing their watermarks in a more prominent position. I disagree. If the watermark is in a prominent position, it is interfering with the image.

Another option is to find a place where you can insert the watermark subtly without affecting the overall image. It is possible and I have seen cases where it is well executed. This allows you to avoid distracting the viewer and probably the thief as well. So when you put a charge against the theft, you can point to the hidden watermark as proof of ownership. It is a workable solution but it takes time and effort. I would only do choose this option if the image were very valuable. That said, not all images would have a place where you can hide the watermark. Old watermark with the blog URL

If you are really worried about your images being stolen, don’t post them online. When you put the photo online, you should be prepared that to risk it being used without permission. As long as you are confident that you can prove that the image belongs to you, you have nothing to worry about.

A good practice is to upload a lower resolution photo. You don’t need a high-resolution image for use on the web. The smaller image would load faster too. The photo in the original resolution would be very useful when it comes to proving ownership of the image. It would be even better if you possess the RAW file.

I don’t have the time to go through my older photos and export versions without watermarks, so I’ll leave them as they are. My future images will not bear any watermarks.

Good move. As you mentioned, the watermarks probably don’t do what you need them to do anyways.

Yeah, they don’t. I really like how the photos look without any watermarks. Of course, if I were to use the photos on another site, I might consider watermarking them with a link back here.