As a show of my disappointment at the site, I deleted my Friendster account. Friendster deleted all the old profiles on their site when they shifted from being a social network to a gaming network. Some people received notification or were alerted of the move. Others like me were caught unaware. 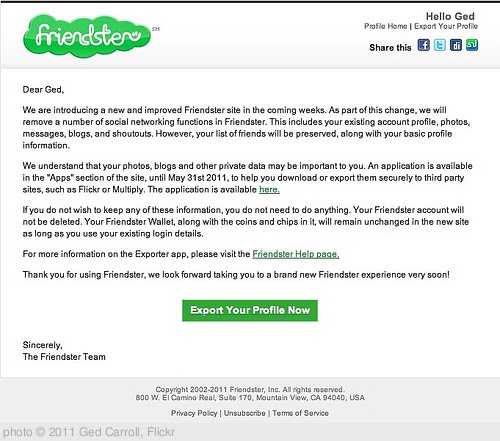 Most of my friends had a Friendster account and it was where we could shared our photos and stalked people. Along came Facebook and most people jumped ship… and never looked back.

Ever since I started using Facebook, I rarely accessed my Friendster account. I simply assumed that it would always be there and whatever I posted there would be safe, since Friendster is a reputable company.

I was wrong. And many people made the same mistake as I did in trusting Friendster with my precious memories. Due to various circumstances, the photos on Friendster were the only existing copies. Those have been permanently deleted by Friendster.

Friendster decided to rebrand itself as a gaming network to refresh the brand after losing out in the social media market. Apparently, Friendster sent out notification of their plans to cease operation as a social network and delete all data from the members’ accounts.

However, many people have been complaining that they lost their precious memories in the forms of messages or photos stored on Friendster. I follow social media trends and tech news keenly on a daily basis and this piece of news managed to slip pass me. It makes me wonder if it was entirely my fault or if Friendster could have done a better job in notifying their members of such an irreversible move.

Some members lost their soft copies of their photos and they only had the copy on Friendster as backup. Those files are now forever lost, robbing us of our precious memories.

As I mentioned, I left the files there instead of backing them up when I could, simply because I assumed that they are a reputable company and would not pull the plug on us just like that.

This reminds me of how Hotmail locked up many accounts due to suspicions of those accounts being used for spam. Many of my friends lost their Hotmail accounts because they were unable to retrieve the code to unlock the accounts. In most cases, they did not set their phone number for the accounts. The verification code was to be sent to the phone number to verify that the account was valid.

Facebook and Google, Gmail specifically, have become an integral part of my life. More so than Friendster was. I have faith that these two giant corporates would be more responsible than Friendster. But this episode with Friendster is a reminder to us not to take things for granted and to always back up important information.

I love your blog.. very nice colors & theme. Did you create this website yourself? Plz reply back as I’m looking to create my own blog and would like to know wheere u got this from. thanks

This is a paid design by The Theme Foundry.